PaxJonesInspiring Stories from around the world!
More
Home Inspirational Stories Authors His books entertain and stimulate others to think about how people can...
Facebook
Twitter
Pinterest
WhatsApp 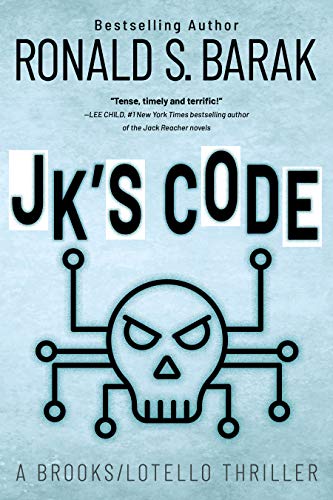 Today, we have the pleasure of interviewing Ronald S. Barak, Author of JK’s Code, the fourth novel in the bestselling Brooks/Lotello series. He resides in Pacific Palisades, California.

He is a bestselling author, Olympic athlete, law school honors graduate, and experienced courtroom lawyer and is uniquely qualified to write his novels that appeal to all political and legal thriller fans.

Described by his readers as a cross between Agatha Christie, Lee Child, and John Lescroart, bestselling author Barak keeps his readers flipping the pages into the wee hours of the night. While he mostly lets his characters tell his stories, he manages to get his licks in too.

Barak derives great satisfaction from knowing that his books entertain and stimulate others to think about how things might be and how people can actually resolve real-world problems. In particular, Barak tackles the country’s dysfunctional government representatives–not just back-seat driving criticism for the sake of being a back-seat driver, but truly framing practical remedies to the political abuse and corruption adversely affecting too many people’s lives today. Barak’s extensive legal background and insight allow him to cleverly pollinate his fiction and today’s sad state of political reality.

What inspired you to transition from lawyer to fiction writer?

I wrote my first novel on a dare from some friends while I was still practicing law full time. I had so much fun writing that first novel that the transition from lawyer to fiction writer became a no-brainer.

How did practicing law help with being a writer?

My novels are legal and political thrillers. I was already a political junkie and knew from every day reading what was current. My legal background helped me write my novels without having to do much research. My first novel, The Amendment Killer, took me the better part of a year to write. Practice makes better if not perfect; I wrote JK’s Code in six weeks. This would not have been as easy for me or as timely if I didn’t have the law practice background that I do.

How would you describe your writing process (plotter versus pantser)?

I am definitely a pantser. I typically have only one or two thoughts in my head about the plot and the possible outcome when I begin writing. Each day, I review what I wrote the previous day (and clean it up) and then keep going from there. The story often turns out quite a bit different than I originally anticipated. In the case of JK’s Code, I originally thought I would write a story about cryptocurrency crime, and, given what was going on in the world, I completely changed that to cybersecurity crime.

I see in your bio that you were an Olympic athlete. How does preparing and competing compare to writing a novel?

Tell us a little about the Brooks/Lotello series.

When I was dared by some friends to write a novel and dared to rise to the challenge, I figured out I should write what I liked reading, political and legal suspense and mysteries. I also figured I should write what I know. I had extensive experience as a trial lawyer and, to a lesser extent, as a trial judge. From there, I created my primary protagonist, Cyrus Brooks, a retired U.S. District Court judge, who kind of thinks and looks like I do and has a personality and sense of humor similar to mine. I love Constitutional Law (it takes all kinds of law and takes all kinds of people, what can I say?). So, I dreamed up the issue of whether amending the Constitution requires Congressional participation. I needed a victim. I created a precocious 11-year-old granddaughter of a Supreme Court Justice. I forced him to choose between saving the country and saving the life of his granddaughter, who was kidnapped by a psychopath wanting to control the outcome of a Supreme Court case about whether an amendment to the Constitution opposed by Congress could still be valid. Because I am diabetic and know the subject, I made the kidnapped youngster diabetic add considerable complication and tension to the story. Because I’m a pantser, these complications arose as I wrote and not at all neatly in advance. I called that first novel The Amendment Killer because the bad guy, a government spook, wanted to kill that Constitutional amendment.

In my next novel, The Puppet Master, Cyrus Brooks and his colleague Frank Lotello, a homicide detective, are tasked with finding a vigilante serial killer, a puppet master, you might say, assassinating corrupt government officials because he feels they had stripped him of everything he had, his family, his business, his dignity and—maybe—even his sanity.

The third novel in my Brooks/Lotello series, Payback, was about a psychopathic serial killer at an international writing conference killing prominent writing personalities because he believed they were not paying him the proper respect as a writer. Some think this killer reflects how I feel like a writer. (You do have to be able to laugh at yourself!) Brooks just happened to be at the conference studying to write a novel of his own.

In my latest Brooks/Lotello novel, JK’s Code, a young college technology genius who happens to be the brother-in-law of Frank Lotello stumbles across the plot of a U.S. president to assure his continuing control of the country, right down to the events of January 6. However, did I imagine such a story in mid-2020?

“Twenty-year-old computer genius Jake Klein, known to his friends as JK, drops out of college to pursue fortune and fame in the field of cybersecurity. Discovering and upending a conspiracy between the presidents of Russia and America to manipulate the results of the 2020 U.S. presidential election, JK finds himself in a deadly game of cat and mouse with the heads of state of two of the world’s most powerful countries—with the emphasis on deadly. Revealing the truth to the world definitely comes with a price. The fourth in the bestselling Brooks/Lotello novels, JK’s Code, is a political thriller teeming with real-time events, satire, suspense, and just a hint of romance that couldn’t come any closer to the realities of 2020 if JK were covertly dividing his time between the White House and the Kremlin—which he may just be.”

Here are some book reviews:

Smart, speedy, and suspenseful, JK’s Code is a flat out great read. My favorite kind of book: characters you care about, a story ripped from the headlines, and a pace that doesn’t let up. The definition of a thriller!

JK’s Code is this generation’s acclaimed and influential War Games. Ronald S. Barak’s prescient, perfectly timed, and polished thriller takes current events and somehow makes them even more terrifying than they already are. Chillingly on point in its message and stunningly effective in its execution, JK’s Code is superb reading entertainment layered atop a cautionary tale.

What are some of the challenges when writing about real-time issues?

Keeping them timely, often referred to as “ripped from the headlines.” In my opinion, to really be “timely,” it is necessary to do your writing before the headlines happen. In The Puppet Master, the second in my Brooks/Lotello series, the killer asserts a legal defense to murder that had never been tried in real-world courts. Two years later, a real-world serial killer asserted that very defense, which went all the way up to the U.S. Supreme Court. In my latest series, JK’s Code, the fictional U.S. president attempted a coup to take over the government. I wrote that seven months before it happened on January 6.

I refer to the challenge of writing about real-time issues as having to be creative, to have an imagination on steroids, one might say, and to dream up things that might happen before they do in the real world. I might have liked JK’s Code to be traditionally published, but that would have taken another year to come to market, and by then, it would not have been as timely as when it was released before many of the events I imagined came to pass.

Where do you get the ideas for your stories?

Are your characters created from scratch, or are they based on people from your life?

Most of the time, they are based on people that I observe in real life. Brooks is very similar to . . . me. Lotello is quite similar to our son. The president in JK’s Code bears a remarkable similarity in personality to Donald Trump. In fact, I’m quite apolitical. I picked on Trump because he was there, and people would see who I was mimicking. My next novel might very well pick on Biden. The 11-year-old kidnapped granddaughter of a U.S. Supreme Court justice in The Amendment Killer has diabetes. So do I. I used that trait because I know the subject well and could write about it without having to do much research. I also think it’s a subject that can benefit from more attention. Payback involves a novelist who is a psychopathic serial killer and thought he deserves more recognition. Was I thinking of me? Hardly, but it always helps to be able to laugh at yourself.

What is the most challenging part of the writing process for you?

What is the best piece of advice you received about writing?

Write what you know and what you love.

What is the worst piece of advice you received about writing?

Write a good story, and the readers will come.